I visited with Dad this weekend and we went through some old photos that he had and I thought that I would post them due to their interesting content. The first photo below - and we are unsure of who took them - shows the stables probably sometime in the 1950's. They look pretty much back then as they look today. 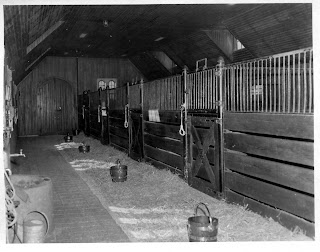 The photo shown below is of the Hartwood stable master and master of the hunt. His name was Merle Brown - to us he was known as Brownie and he took care of the stables, the horses and all of the riding equipment concerning the foxhunt. Brownie and his wife Alice Brown lived in the house adjacent to the stables. When Mary Lawrence sold Hartwood to Allegheny County in 1974 it was stipulated in the sales contract that the Browns would live rent free in their house until their passing which is what happened. 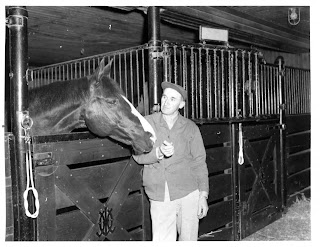 This photo below is of John Lawrence and Mary Flinn Lawrence posing at what is though to be believed at the site where Hartwood was being built. The photo # on the back is #B29, and when compared to the 2 photos below - which will knock your socks off! - the other 2 photos are dated in the same sequence, which leads us to believe that they were all taken from 1925-1927 when Hartwood was built. 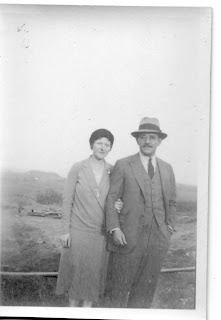 This photo below my friends is one of only 2 photos taken of the Hartwood mansion under construction! It shows the front (actually rear) carriage entrance with scaffolding on the roof and debris piles in the front. This photo # is #B05 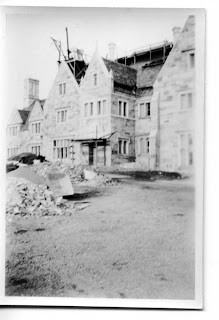 This photo below shows the rear patio area (outside of the great room) under construction as well! There are debris piles and scaffolding in this photo as well. Most likely the roof was just being installed. This photo # is B29 as well. If you look closely you can see a worker right behind the debris pile. 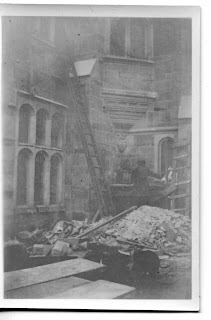 This leads me to believe that there are many more pictures from this photo lot to be found! Each of the above 3 pictures measures app. 2.5" x 3.5" and are black and white. I am going to dig into our family archive to find as many of these little pictures as I can. This is a real find because no one had found pictures of the Hartwood mansion under construction until now!
Stay tuned as I will post more pictures as they become available!
Jeff L.

Posted by Jeffrey Lawrence at 8:02 PM

My great-grandfather William Ridley was the first stable master at Hartwood, until his death in 1940. I have a few pictures, as my grandmother was born and raised at the stables.

Please email me or post your pictures, I would love to see them!

Kara:
I am Arthur K Ridley's daughter and my grandfather was Arthur W Ridley. We are visiting with Colin Ridley who is Robert Hodge Ridley's son. He is interested in knowing more about the Ridley history.
-Maria